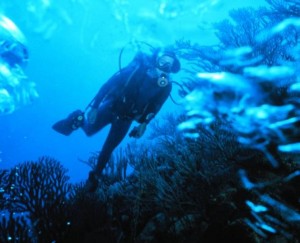 Scuba diver. Image thanks to Scott Sanchez at en.wikipedia

If you were to close your eyes and drift away on an idle daydream, one of the scenarios that you may very well end up imagining is one in which you’re swept away by the profound blue of a deep ocean, drenched in peaceful serenity. This scenario can further be filled out by bright, colourful and lively schools of fish, as well as by unseen and well camouflaged schools tending to their daily business. The truly great thing about this type of daydream is that it needn’t be fruitless fantasy or something viewed on a plasma TV; this is to say that the above scene is realised every day when divers penetrate the incredible waters off the South African coast.

Besides the beautiful houses for sale in Pietersmaritzburg, we South Africans are enormously blessed with over 3000km of stunning coastline which includes some extremely well known (and even world famous) scuba diving locations. This stroke of luck is further augmented by the fact that our diverse ocean conditions and marine life make diving virtually anywhere along the shoreline a treat.

On the north eastern seaboard, running along the east and south coast is the warm Mozambican current which runs down the east coast of the Continent from the equatorial regions. This current brings Indian Ocean waters to the southern tip of the mother continent, and with them a great variety of interesting and visually exciting aquatic life. The warm water and rich marine life make diving in these waters a spectacular and comfortable experience for those brave enough to engage in scuba activities. Whereas pristine and protected areas like Kosi Bay offer an incredible experience, it is the Aliwal Shoal (found just off of the shore of the coastal town of Umkomaas in KwaZulu-Natal) that has an international reputation for being one of the best dive spots in the world. The pioneer diver and co-inventor of the Aqualung underwater breathing device (which developed into scuba gear), Jacques-Yves Cousteau, marked the Aliwal Shoal as being amongst the ten best scuba diving areas in the world.

Heading down southwards along the coast is the Agulhus current named after Cape Agulhus, the southernmost tip of the continent. The Agulhus current is responsible for transporting the Indian Ocean waters along the southern coast of South Africa, along the Eastern Cape and Garden Route to Cape Town. The Transkei and Garden Route waters are very popular owing to the still comfortable water temperatures and the richness of the marine life. Towns along this region are also very popular holiday spots with Knysna and Plettenberg Bay being among the sought after vacation towns in South Africa.

The last stop looked at in this article is the beautiful city of Cape Town. Owing to the population density of the area and the major sea port one would expect the waters to be polluted and not worth the expense of scuba diving. The truth of the matter, however, is quite different: due to the fact that Cape Town sees the collision of two major oceans and their respective currents, it is one of the most diverse environments that South Africa has to offer. Unfortunately, the cold waters of the Bengula current necessitate a dry suit and strong constitution with regards to an ability to withstand less than comfortable temperatures. The effort is definitely worth it, however, and Cape Town’s ecosystem variety and beautiful underwater environments makes for scuba diving that people are willing to travel across oceans to achieve.